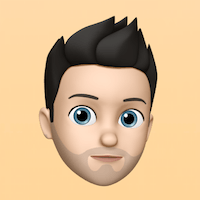 Biometrics is the most suitable means of identifying and authenticating individuals in a reliable and fast way through unique biological characteristics.

Biometric systems can be used in two distinct modes as follows:

A biometric system operates by firstly acquiring biometric data from an individual, then extracting feature set from the data, and finally comparing the feature set with the template in the database as shown in the below figure. 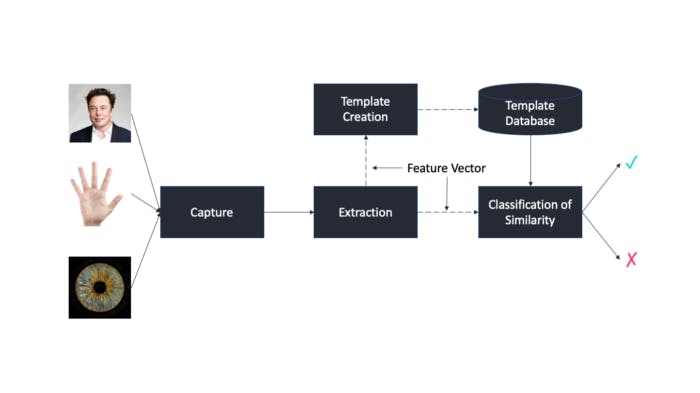 In the second century B.C., the Chinese emperor Ts'In She was already authenticating specific seals with a fingerprint.

Fingerprints were first used in a commercial setting in 1858 by William James Herschel, a British administrator in India.

Having been put in charge of building roads in Bengal, he had his subcontractors sign contracts with their fingers.

That was an early form of biometric authentication and a sure way of finding them more quickly if they defaulted.

At the end of the 19th century, Bertillon, a French police officer, took the first steps in scientific policing.

It generally combines other security technologies such as smart ID cards and chips (for electronic passports).

Biometric authentication compares data for the person's characteristics to that person's biometric "template" to determine resemblance.

Biometric identification consists of determining the identity of a person.

Biometric authentication techniques are classified by the type of characteristics evaluated: physiological attributes or behavioral singularities.

Physiological biometrics are based on classifying a person according to data obtained as part of the human body such as his fingerprints, face, or eye iris.

The most popular biometric to date, fingerprint recognition, can utilize a number of approaches to classification, based on minutiae which are a reproduction of epidermal friction skin ridges found on the palm side of the fingers and thumbs, the palms, and soles of the feet. 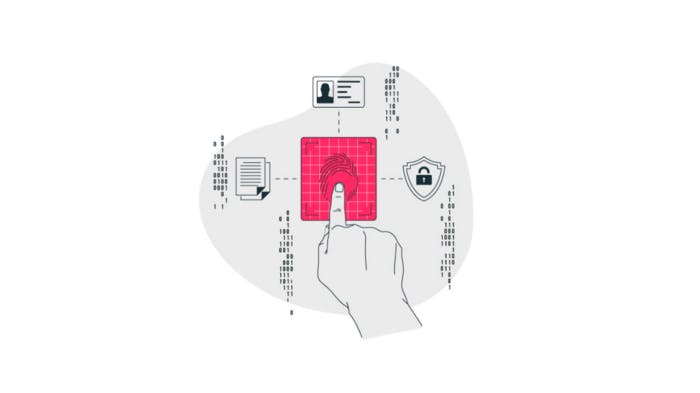 We use the geometric features of the hand such as the lengths of fingers and the width of the hand to identify an individual.

The system record face images through a digital video camera and then analyze facial characteristics like the distance between the eyes, nose, mouth, and jaw edges.

The iris is the colored tissue surrounding the pupil of the eye and is composed of intricate patterns with many furrows and ridges.

The most common are:

The different techniques used are the subject of ongoing research and development and are being improved continuously.

We compare biometric authentication methods based on the following six characteristics are security, accuracy, permanence, usability, adequacy, and costs with 3 levels which are high, medium, and low. 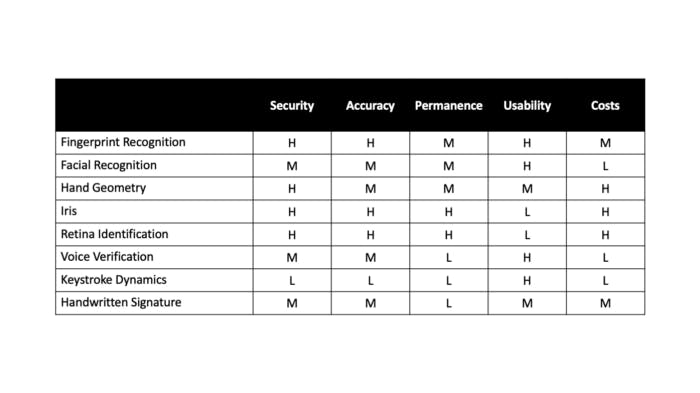 In a replay attack, an intruder has been able to record successful login sessions involving biometric systems or devices and later tries to perform authentication on his own by replaying the captured data.

Some biometric systems may be vulnerable to attacks using fake credentials. For example, if a biometric system relies on facial recognition a hacker may be able to fool such a system by holding a life-size photograph of the user in front of the camera.

Some biometric systems are more vulnerable to stolen credential attacks than others. But the thought of a stolen eye is just gruesome to us.

Biometrics can be defined as the most practical means of identifying and authenticating individuals in a reliable and fast way through unique biological characteristics.

Of course, increased public acceptance, massive accuracy gains, a rich offer, and falling prices of sensors, IP cameras, and software make it all the easier to install biometric systems.